Sansevieria eilensis is a slow-growing succulent plant. It has rough, cylindrical, downward curving leaves which arise from an underground rhizome. A mature plant typically has 2 to 3 leaves, which are succulent and between 3–5 inches long and 2-2.5 cm thick. The leaves are typically a light bluish-green color with regular bands of white. The leaves are also marked by several green longitudinal lines, marking areas where the leaf will fold in on itself during drought, or swell after watering. The leaves of Sansevieria eilensis change morphology dramatically as the plant grows. Young S. eilensis plants have a deep channel, which runs the full length of each leaf, and has reddish-brown margins edged with a papery brown cuticle. As the plant matures, the edges of newer leaves roll together to form a smooth cylindrical leaf with a dried papery cuticle at the tip and base of each leaf. It produces flowers which are borne on a spike-like raceme approximately 30 cm long. 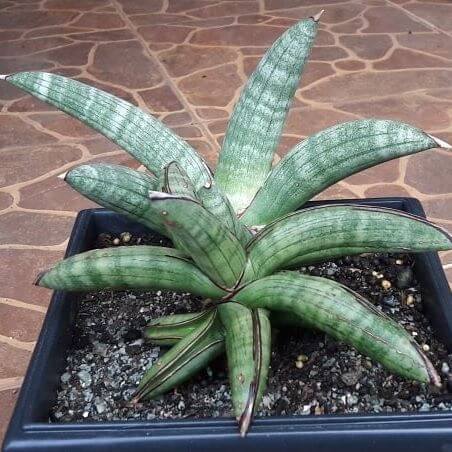 How to grow and maintain Sansevieria eilensis:

Light:
It requires bright, filtered light and can stand plenty of direct sunlight.

Water:
Water your plant regularly during the growing season and always keep the soil evenly moist but not soggy. You can allow the topsoil to become slightly dry between each watering. During the winter months, reduce watering.

Fertilizer:
Fertilize monthly during the active growth periods in the spring and summer, with a liquid or water-soluble fertilizer. Try not to fertilize during the winter season.

Propagation:
It can be easily propagated by dividing up overcrowded clumps of leaves. Separate clusters of leaves from rootstock with a sharp blade or knife when the leaves are six inches long. Most clusters will have some roots attached and can be planted directly in the normal potting mixture. Also can be propagated by leaf cuttings.

Re-Potting:
Re-pot the plant during the spring season, only when plants get crowded and need dividing.

Pests and Diseases:
It has no serious pest or disease problems. Watch for bugs, spiders, and mealybugs.

5
No Result
View All Result