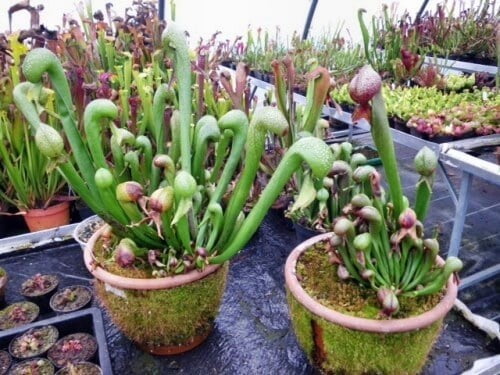 California Pitcher Plant (Darlingtonia californica) is a carnivorous plant that grows in bogs and seeps with cold running water. Because it is unable to get the nutrients it needs from the soil, it has developed a way to feed on the insects it traps. It has long, tubular green leaves that have prominent purple-red veins, made more prominent when exposed to bright light. They arch at the top so that the opening faces downward like a hood. Hanging from these hooded tubes are forked leaves that look like serpents’ tongues. The upright hooded tubes, together with the “tongues”, resemble cobras ready to strike, giving this threatening plant another common name, Cobra Lily. 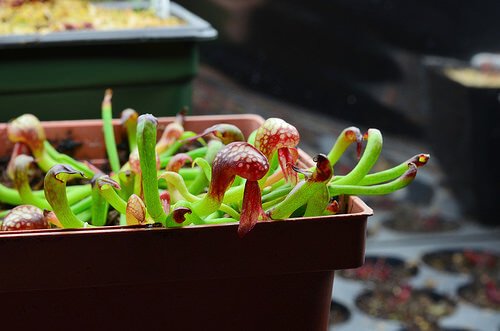 How to care and grow California Pitcher Plant (Darlingtonia californica)?

It grows best in a nutrient-poor medium because the rich potting mix will harm its roots. Use a mixture of 1 part peat moss with 1 part perlite or sharp sand.

Keep soil evenly moist year-round. Use only distilled or rainwater because this plant is sensitive to chemicals in tap water. Do not allow the soil to dry out. If leaves become limp, it means that the soil is too dry. Water thoroughly, although the plant may not recover.

It requires moderate to high, at least 40% relative humidity. Mist the plant every day or set the pot on a tray of wet pebbles.

Do not fertilize the plant. It makes its own food through photosynthesis when there are no bugs around.

It can be easily propagated by division. Divide in spring when new growth begins. Also can be grown from seed, but germination is slow.