Dancing Bones Cactus (Hatiora salicornioides) is an ornamental, shrubby cactus plant. It has long, many-branched, fleshy stems that are up to 60 cm tall. A stem consists of smaller segments with a length of up to 3 cm. The segment has a shape that resembles a bottle. It has small deep yellow-orange blooms that develop to translucent berries with a reddish end. It is very easy to grow in both indoors and outdoors. 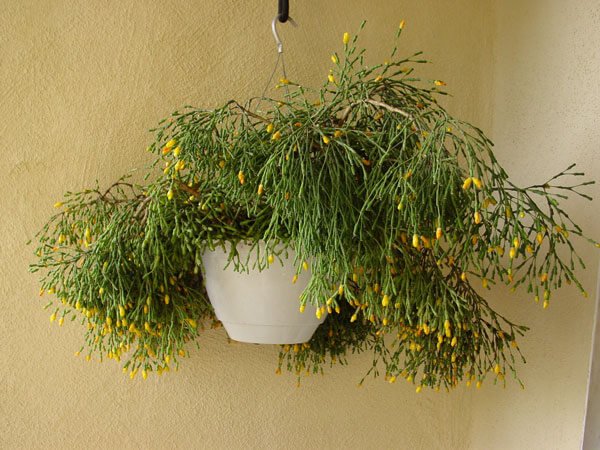 How to grow and maintain Hatiora salicornioides (Dancing Bones Cactus):

Light:
It thrives best in the bright, but indirect light. Direct sunlight should be avoided, as it can cause brown spots.

Soil:
It prefers to grow in neutral, Well-drained soil. Use a mixture of 1 part potting soil and 1 part fine-grade fir bark.

Water:
Water regularly, keep the soil evenly moist but never allow your plant to sit in water. Allow the topsoil to become slightly dry between each watering.

Fertilizer:
Fertilize every 2 weeks after the bloom period with a balanced 10-10-10 fertilizer, and dilute to half strength.

Propagation:
Dancing Bones Cactus can be easily propagated by stem cuttings. Take stem cuttings from one to four segments. Allow the cut ends to dry for 24 hours before placing upright in moist perlite. Rooting occurs between 3-4 weeks. It is rarely propagated by seed, sow seeds in the spring.

Repotting:
Re-pot every year or every 2 years in the mid-summer. Never re-pot during the bloom or following resting period. Re-pot by removing only the loose soil around the roots. Transfer immediately to a wider pot.

Pests and Diseases:
It has no serious pest or disease problems. Watch for spider mites, mealybugs, and fungus.

7
No Result
View All Result