Rhubarb (Rheum rhabarbarum) is a vegeable, herbaceous
perennial growing from short, thick rhizomes. The leaves are
large and somewhat triangular. Rhubarb will grow to be about
to 2 to 3 feet tall and spreads 3 to 4 feet. On up to 5-foot
stalks, the plant produces flowers that, in their nascent
stage, resemble pink-tinged cauliflower. They gradually
unfurl into great clouds of white. Remove the flowers as they
appear. Because this will direct the plant’s energy into
growing tasty stems instead of flowering and setting seed. 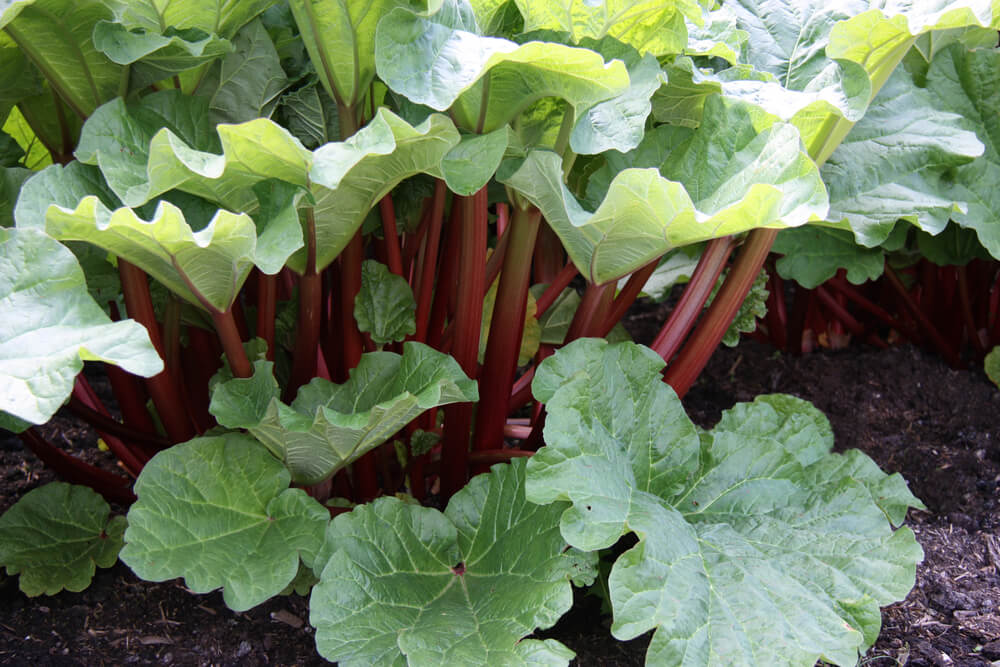 How to grow and maintain Rhubarb (Rheum rhabarbarum):

Water:
Water your plant regularly during the growing season and
always keep the soil evenly moist but never allow your plant
to sit in water. You can allow the topsoil to become slightly
dry between each watering.

Harvest:
Try not to harvest during the first year of growth. Cut the
tart red stalks from February to April after the first year
of undisturbed growth. Pluck the outside stalks from large
plants with a sideways and downwards action to pull them away
cleanly from the crown. After picking, cut the leaves from
the stalks and safely dispose of the leaves, as they contain
oxalic acid, which is poisonous. Stalks can be harvested all
at once or selectively as required. Every 4 to 5 years dig up
and divide your plants to avoid over-crowded and stunted
plants.

Propagation:
It can be easily propagated by dividing the root mass,
growing rhubarb from seeds, or by Tissue Culture. It can
propagated by planting pieces obtained by dividing the crown.
Pieces are taken from four to five years old crowns. You can
divide rhubarb with equal success in either early spring or
late fall. Start seed about 6 – two months before last frost
date.

Pests and Diseases:
There is no serious pest or disease problems. Watch for slugs
around new seedlings. Otherwise, rhubarb is a tough, hardy
plant with few pests.

3
No Result
View All Result