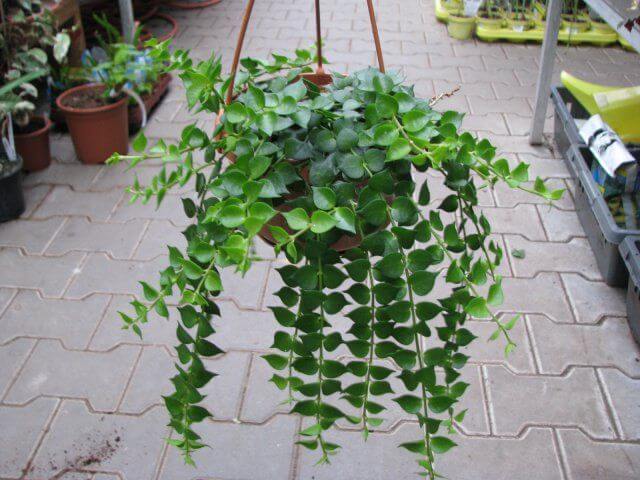 Million Hearts Plant (Dischidia ruscifolia) is an ornamental, evergreen, perennial sprawling or climbing plant. The stems are Slim, repeatedly branched from near the base, terete, trailing or arching out under the weight of precisely ranked leaves, growing up to 1 metre long before taking root at the tip and continuing, quite tough, green or yellowish green toward the ligneous base, the average ones as thick as a pencil, with latex. The leaves are small succulent heart-shaped, thick, succulent, and hard, almost like small beads, less than 1 cm long, similarly green on both sides, with pronounced nerves, very numerous, twistingly arranged in between one another, thereby facing the greatest amount of light. If grown under intense light, the plant’s leaves will develop a red tinge. It has the tiny white flowers grow in leaf axils bloom throughout the year and remain for long periods of time. It produces fruits that are lighter green, flattened on the upper surface, gradually pointed. Keep plants away from children and pets. Because the white milky sap in the plant parts is toxic if consumed in large quantities. So avoid contact with the sap as it may cause skin irritation in certain individuals. 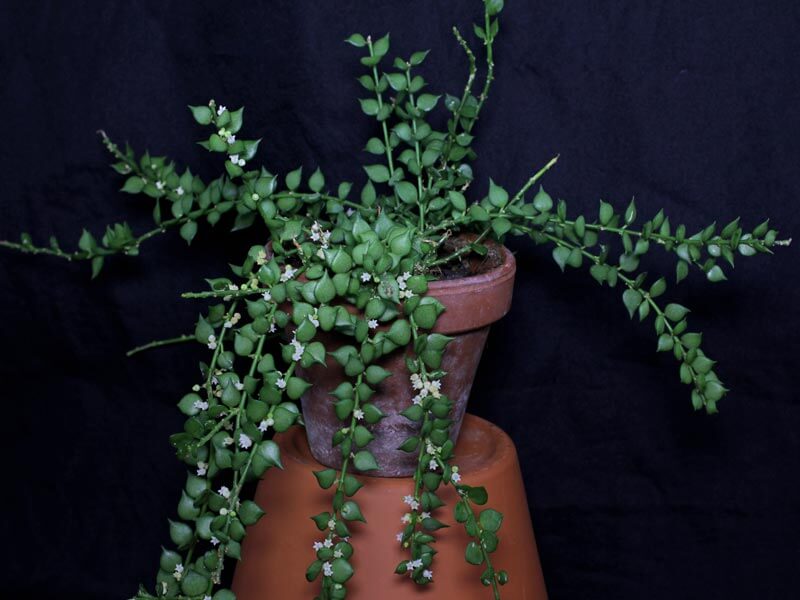 How to grow and maintain Million Hearts:

Light:
It thrives best in a partial shade or bright shade. Keep your plant five to six hours sun per day if grown indoors. Midday sunlight in summer can burn the leaves. If its too shady, the stems will attempt to lean towards the sun or get spindly and fall over.

Temperature:
Million Hearts plant prefers a normal temperature between 20-30 °C during the daytime. At night time it prefers ideal temperature 12-18 °C but never below 10ºC.

Water:
Water regularly, but do not overwater. Water dischidia ruscifolia when the top inch of soil should be dry out between watering.

Fertilizer:
Fertilize the plant during the growing season with an any organic fertilizer or a fertilizer rich in potassium and phosphorous, but poor in nitrogen, because this chemical element doesn’t help the development of succulent plants, making them too soft and full of water. Quit fertilizing six weeks before the first frost but continue watering during dry autumn weather to help keep plants fortified during the dry winter.

Propagation:
It can be easily propagated by cuttings. Take semi-ripe cuttings of Million Hearts and grow in a shaded, closed case with gentle bottom heat or layer.

Pruning:
Prune the plant lightly to keep it tidy. Make sure that do not prune plants in the fall. Just remove any dead or diseased leaves or sticks.

Repotting:
In any season it is best to lay the stems out for several days before replanting them and afterward pot them just in dry soil and withhold any water until they start to shrivel or begin growing again. Re-pot every 2 years.

Pests and Diseases:
No serious pest or disease problems. It is very susceptible to stem and root mealybug, which can be fought easily with common pesticides, and damage from these may well initiate a fungal attack. Any time when there is a dead or dying stem in the pot it is important to evacuate it instantly and completely before other healthy stems can turn out to be sick as well, separate the healthy parts, dry them off, and re-root them in new fertilizer.